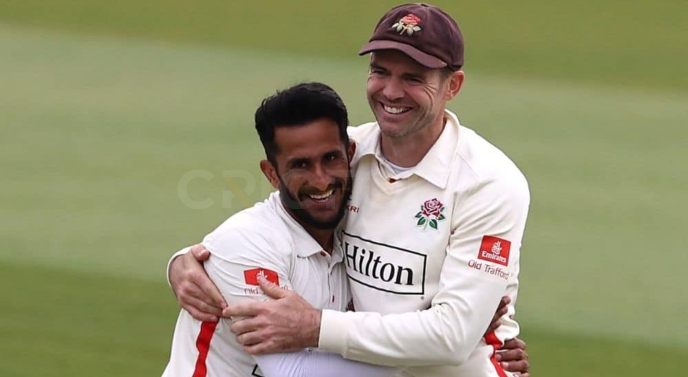 Hasan Ali's County Championship mate James Anderson has resembled him like a wrestler when it comes to his wicket celebrating style. The New Zealander pacer, while talking in a video, discussed Ali's famous generator style and said that it looks more like a wrestler.

The Kiwi bowler, commenting on Hasan's stamina, said that he boosts everyone's else confidence when there is no crowd. Uttering praise on the Pakistani pacer, Anderon further stated he never says no to the captain.

Anderson continued by saying Hasan is one of those who do not come to the County for money but to play cricket. He reckoned the Pakistani bowler can bowl all day if asked for.

"Hasan Ali's celebration style is so energetic. Sometimes it looks similar to wrestlers. When there is no crowd in the ground, his voice and aggression while celebrating comes out so loud. And, it boosts everyone else's confidence,"

"A lot of players come to play county to earn money. There are very few who come here with a passion for the game, Hasan is one of them. He loves bowling and never says no to the captain. I believe if he asked to bowl the whole day, he will,"

Notably, Hasan, so far, is the highest wicket-taker in the County Championship with 24 scalps to his name in just four matches. Both Anderson and Hasan are representing the Lancashire county club in Division 1 of the contest.