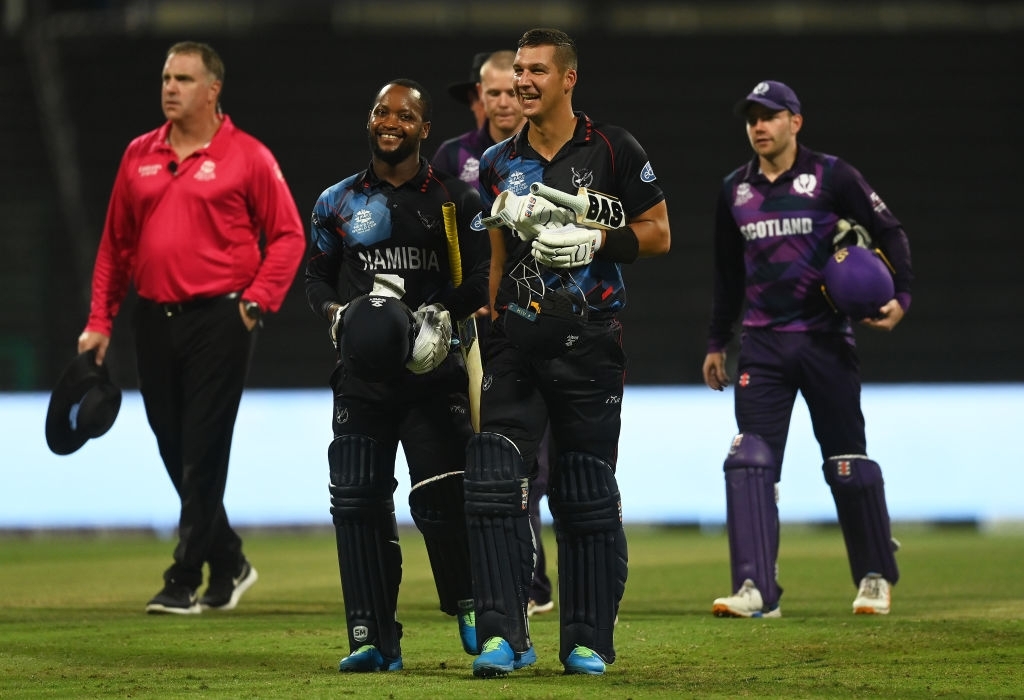 Never underestimate the power of Namibia, say fans. Undeniably, Namibia, from the very beginning, are surprising the cricket realms with their devotion they are inducing to qualify for the semifinal of the ICC T20 World Cup 2021. Undergoing the warm-up games, they may have lost to Oman and Scotland respectively but had an electrifying beginning in the Group Stage.

They started their journey with a downfall versus Sri Lanka but were high on hopes against the Netherlands. Undergoing the do-or-die encounter versus Ireland, Namibia made sure to fix their place in the Super 12s.

Gerhard Erasmus and men, beginning their T20 World Cup, Super 12 campaign, won the thrilling game against Scotland on Wednesday, who were already coming from a blow facing Afghanistan.

Erasmus bowlers, on their choice to field first, sustained a substandard target of 110 runs. It looked easier to chase but Scotland bowlers bowled with all their heart pressurizing Erasmus's batters while defending their score.

Notably, Richie Berrington and co could have collapsed below 109 but the hot efforts from Michael Leask of 44 off 27 balls helped the team cross a hundred to defend. Namibia must have high hopes to chase it down with the likes of David Wiese, Stephan Baard, Erasmus, and Zane Green in the squad but they might not have an idea about Scotland's economic bowlers.

Undeniably, it was a tough chase but with Safyan Shaarif induced to deliver the last over, J J Smit made sure to coil up the game with a massive six bringing 115 sealing accomplishment on the very first bowl of the over.

Scotland almost pulled the rabbit out of the hat but there were not enough runs to defend - Crossing 125 may have worked out. The pacers started nicely with the ball but could pick only one wicket in powerplay. After Green fell, the Scottish spinners had all to build the pressure. They took the game till the final over and must not be disappointed with their efforts.

Erasmus' decision to field first was benefitted as his bowlers plucked three wickets allowing no room for Scotland's but only restrictions.

Now, Scotland will play their next match with New Zealand on 3rd November, whereas, Namibia will see Afghanistan on 31st October.