Watch: Rohit Sharma forgets whether to bat or bowl on winning toss 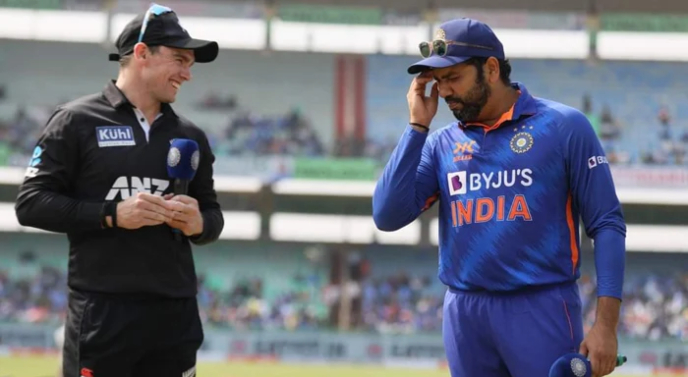 In the second one-day international match, India's captain, Rohit Sharma, won the toss and elected to bowl first against New Zealand. However, it took him a while to make the decision and he mentioned that he had "forgotten" about the team's call. The hosts, who currently lead the three-match series 1-0, kept the same team from their opening win. New Zealand also kept the same team from their 12-run loss on Wednesday, with their captain, Tom Latham, stating that he would have also chosen to bowl first if he had won the toss.

🚨 Toss Update 🚨#TeamIndia win the toss and elect to field first in the second #INDvNZ ODI.

In the first ODI match, India held on to beat New Zealand despite a century from Michael Bracewell. Shubman Gill scored a brilliant 208 for India and helped the team post a formidable total of 349-8. Gill's innings spanned 149 balls and featured 19 fours and nine sixes. Bracewell also had a strong performance with 12 fours and 10 sixes, but ultimately finished on the losing side. Siraj was the standout Indian bowler with figures of 4-46.

As the teams prepare for the second match, India will be looking to clinch the series with a win while New Zealand will be striving to level the series. Both teams have chosen to keep their lineups unchanged from the previous match. India will be led by Rohit Sharma and their top performers such as Shubman Gill and Virat Kohli will be looking to replicate their strong performances from the first match. New Zealand, under the captaincy of Tom Latham, will be hoping to bounce back and secure a win in this match.

The game promises to be an exciting one with both teams having strong players in their lineup. India's Shubman Gill had an impressive 208 in the first match, and New Zealand's Michael Bracewell had a century despite the loss. The Indian bowlers led by Siraj will be looking to repeat their performance in the first match and secure another win for the team. On the other hand, New Zealand bowlers will be looking to contain the Indian batting lineup and restrict them from posting a big score.

In conclusion, the second one-day international match between India and New Zealand promises to be an exciting encounter with both teams looking to secure a win. India will be looking to clinch the series with a win while New Zealand will be striving to level the series. Both teams have chosen to keep their lineups unchanged from the previous match. The match will be played on Saturday and the fans are eagerly waiting for the game to begin.