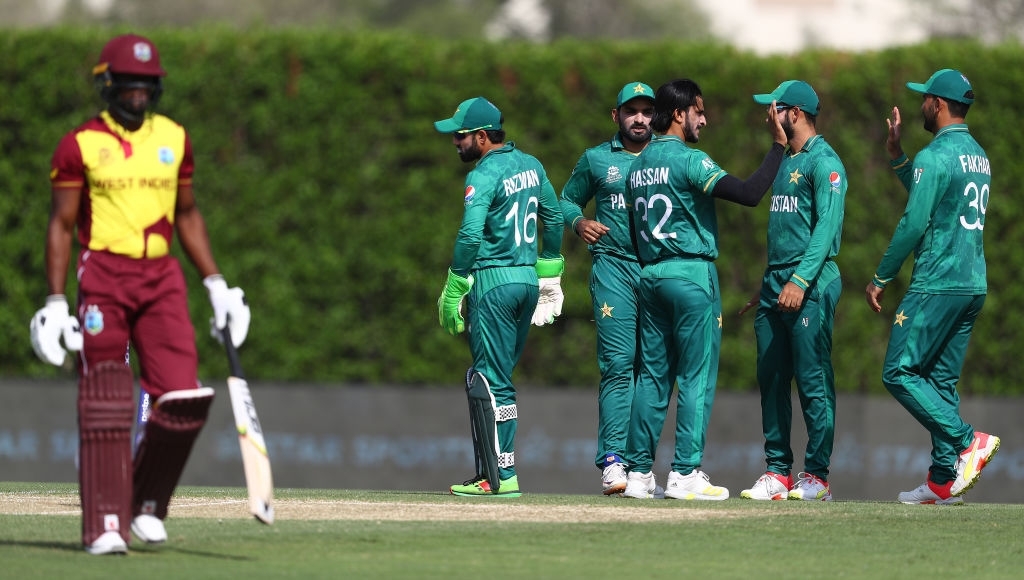 There was a huge setback to Pakistan after they failed with a big margin versus the West Indies in their warm up match of the ICC World Cup 2019. The game affected green shirts' thoroughly minimizing their chances to qualify for the semifinal with a substandard net run rate.

As the ICC T20 World Cup 2021 is underway with the striving teams undergoing Round 1, Group Stage, and battling in the warm up matches, Babar Azam and co rivaled the Kieron Pollard-led team in their first warm up match. The green men made sure that the encounter turns out in their favor this time to settle with the best by the end.

After the men in maroon chose to bat first, green bowlers went in phenomenal action stopping runs and extras and conceded a target of 131 as the West Indies lost seven men on 130. Hasan Ali, Haris Rauf, Shaheen Afridi grasped two wickets for each conceding 21, 32, and 41 runs respectively. Imad Wasim's contributions are worth mentioning as the lad picked a wicket delivering 3 overs and conceded only 6 runs.

Although the men in maroon did not have runs to defend but they must not be happy with their action-less bowling. Mohammad Rizwan had a bad day and left the strike on 13 runs with rest of the line-up anticipated to take charge.

Babar smashed a fifty coming off 41 balls whereas, Mohammad Hafeez was gone for a duck. Fakhar Zaman, who joined the party at third, thrashed maroon bowlers by 46 off 24 and remained not out.

In short, Pakistan brought up the below-average target in only 15.3 overs to polish the net run rate and spared seven men too.

Now, the West Indies are scheduled to play their next warm up game against Afghanistan whereas, Pakistan will encounter South Africa on 20th October. Meanwhile, enjoy the highlights of the thrilling match: