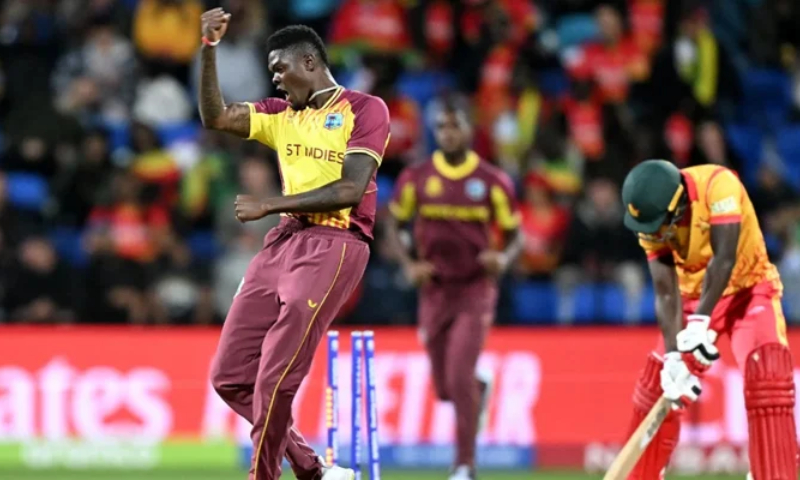 The two times winners of the ICC T20 World Cup, West Indies, although were on the verge of being eliminated from the 2022 edition of the marquee event, they are now alive in the tournament after handing over a defeat to Zimbabwe.

Alzarri Joseph's 4-wicket-haul helped the men in maroon to get past Zimbabwe by 31 runs. Earlier in the day, they won the toss and opted to bat. Despite having some hard hitters in the team, they managed a score of 153 runs on the loss of seven wickets.

Johnson Charles was the team's top-scorer with 45 from 36, following Rovman Powell's 28 from 21 and Akeal Hossein's 23 from 18. Sikandar Raza of Zimbabwe was the top bowler from his side as he picked a 3-wicket-haul, but it ended in vain. He conceded only 19 runs for four overs.

Sean Williams had his say with one scalp in three overs and threw away only 17 runs. Blessing Muzarabani too, picked two wickets in four overs. After Zimbabwe's men started to chase, they faced critical times in front of the maroon bowlers. 29 from 22 was the highest scorer from their end, which came from Luke Jongwe. The rest departed at short intervals. However, Wesley Madhevere's 27 on 19 balls helped them to give some hope.

Later, the efforts of Joseph, Jason Holder's 3/12 from 3.2 overs, and Obed McCoy's 1/19 from three overs helped them cheer not only for winning, but keeping the hopes alive in the World Cup's Super 12 stage.