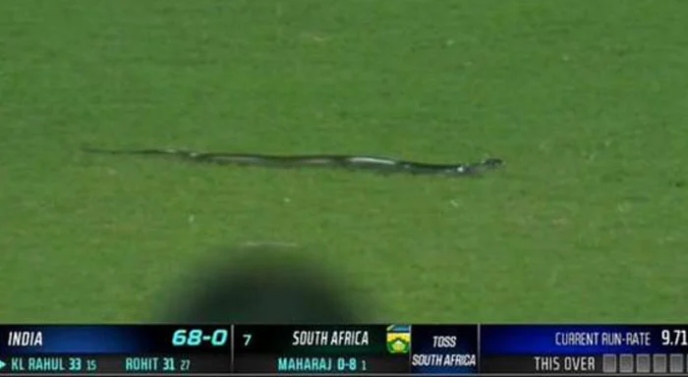 One of the very few rare incidents in a cricket match was spotted today during ongoing India vs South Africa 2nd T20I. A snake entered the field of Barsapara Stadium and crawled until the groundsman carefully carried it away.

The animal did not harm anyone, nor was anyone harmed by its poisonous attack. Since the footage was recorded by the cameraman, it has gone viral on social media. Fans are using it for meme purposes, saying these things can only happen in India.

The incident took place when Indian openers Rohit Sharma and KL Rahul were present on the crease for batting during the seventh over of the first inning. Have a look at the footage and the memes:

Since snake was not the only thing to pause the game, as poor quality floodlights also interrupted, a user tweeted,

Earlier in the day, South Africa won the toss and elected to field. They chased a hefty target of 238 runs, as they conceded 237 and managed only three scalps. India currently lead the series by 1-0, and it is now to see if South Africa will level it by 1-1, after winning the Ind vs SA 2nd T20I.