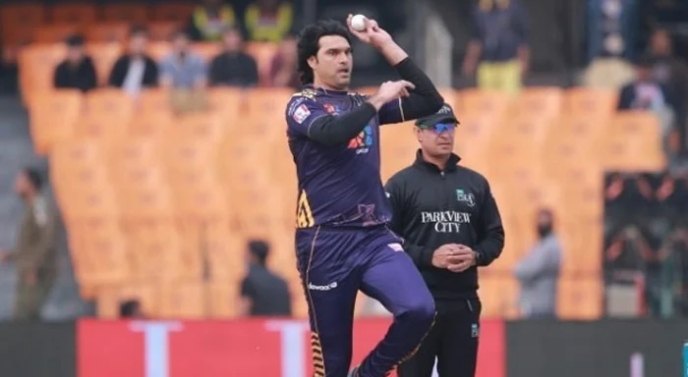 Aleem Dar, the notable name from the world of cricket umpires, suspended Mohammad Irfan's over after the Quetta Gladiators' bowler bowled two back-to-back deadly no-balls versus Multan Sultans on Friday.

The QG on-field players gathered around the umpire to request for the pacer but Aleem, who is also a member of the ICC umpires elite panel, stuck to his decision like always. Iftikhar Ahmed, the former Islamabad United player, was induced in place of Irfan.

Notably, Sultans defeated Gladiators with a massive margin further diminishing Sarfaraz Ahmed and co's chances to qualify for PSL 7 playoffs. However, QG can still have a chance in case they heavily thrash away Karachi Kings in their next encounter alongside Lahore Qalandars beating Islamabad United on Saturday evening.

It must be noted that the MS win vs QG on Friday has propelled Peshawar Zalmi and Lahore into the playoffs. MS became the first side to qualify earlier. Notably, the fourth empty spot anticipates the last team to qualify for the playoffs. With Karachi Kings out of the tournament, QG and IU will be wanting to fulfill the vacancy.

So far, United's chances are polished but QG's are visibly in trouble with minimum chances and dependability on others left to favour them.

As far as their place on the PSL 7 points table is considered, they are at fifth with six points coming from four wins out of eight matches played.