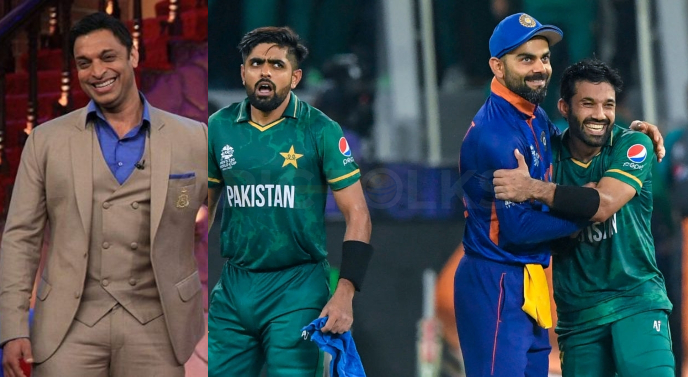 Pakistan's former bowler, Shoaib Akhtar, desires to see India reaching the final of the ICC T20 World Cup 2021 to witness the men in green once again overpowering them.

As Ind vs Pak of the Super 12 round commenced, the Babar Azam-led men, stepping in the matter of disgrace, thrashed away India and won the contest by 10 wickets. The top-notched victory is still sung around the corners of the world. Undeniably, the cricket record books will always remember the clash as the high-voltage one, meeting and breaking multiple records.

Akhtar, who proved his friend, Harbhajan Singh wrong and got many trump cards to troll, says that he will like to see India in the final as it will make the World Cup bigger. Furthermore, he urged that their campaign was not ended after the two losses.

"Also, I was telling everyone not to write off India earlier. Their World Cup was not finished after the first two games."

“Personally, I would India to qualify to the final with Pakistan so that we can beat them again. It will be good for cricket. It will make the World Cup even bigger,”

Virat Kohli and co will encounter Namibia on 8th November in a do-or-die clash. Their fate is not 'wholly' in their hands as if the Black Caps overpowered Afghanistan on 7th November, the men in blue will be out of the contest. However, if New Zealand will lose to Mohammad Nabi and men, Ind vs Nam will decide their qualification for the T20 World Cup 2021 semifinal.